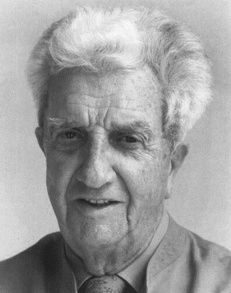 Konrad Henkel (1915–1999) was the younger brother of Lisa Maskell and grandson of entrepreneur Fritz Henkel, who founded the company Henkel & Cie. in 1876. In 1961, after the death of his brother Jost Henkel, he took over as Chairman of the Management Board, a position he retained until 1980. From 1980 to 1990 he was Chairman of the Supervisory Board and the Shareholders’ Committee.

After completing school in Düsseldorf, Konrad Henkel studied Chemistry in Munich and Braunschweig and in 1939 obtained his doctorate from Technische Hochschule Karlsruhe (today KIT). He received numerous distinctions, including an honorary doctorate from the Faculty of Mathematics and Natural Sciences at Heinrich Heine University Düsseldorf in 1972, and in 1976 was made an honorary citizen of the state capital Düsseldorf. In 1995 he was awarded the Grand Federal Cross of Merit with Star and in 2000 a lecture hall at Heinrich Heine University Düsseldorf was named after him. 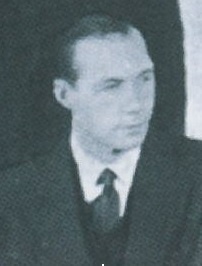 Deputy Chairman of the Board of Trustees from 1976 until 1991

After working for Bankhaus Schliep & Co. in Düsseldorf, the Chase Bank in Paris and the British Overseas Bank Ltd. in London, he trained as a banker. In 1932 Friedrich Malitz joined the family business Henkel and subsequently worked his way through several departments. When Henkel & Cie. became a joint stock corporation, Henkel GmbH, Friedrich Malitz continued as Managing Director until 1973.

When the Gerda Henkel Foundation was established Friedrich Malitz became Deputy Chairman of the Board of Trustees. He remained in this position until his death in 1991. 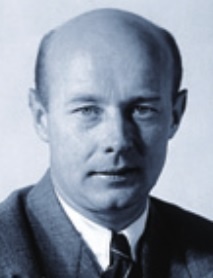 After studying in Berlin and working as a stock market journalist for “Buchwalds Börsenbriefen”, as well as posts at Deutsche Revisions- und Treuhand AG and Dresdner Bank in Berlin, in 1942 Hermann Richter was appointed Managing Director of Henkel & Cie. GmbH. Until 1982 he worked in various departments and was a member of executive and supervisory boards within the company.

Hermann Richter advised the Gerda Henkel Foundation from its establishment and remained a member of the Board of Trustees until his death in 1982. 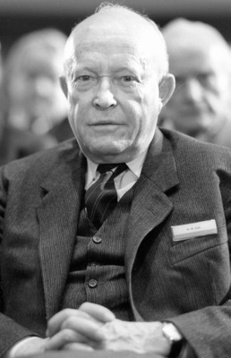 Wilfried Guth studied Economics at the universities in Bonn, Geneva, Heidelberg and at the London School of Economics, obtaining his doctorate from Heidelberg University in 1957. While still studying, he began working at Deutsche Bundesbank in 1953 and it was here that he was made Head of the Economics and Statistics Department in 1958. One year later he became Executive Director of the International Monetary Fund in Washington.

After the death of Hermann Richter, Wilfried Guth was appointed to the Gerda Henkel Foundation’s Board of Trustees, serving as a member for over ten years. 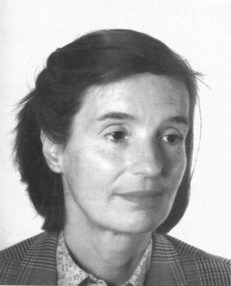 Anette Petersen-Brandhorst (1936–1999) studied Ethnology at the University of California in Berkeley. Together with her husband Udo Brandhorst she built up one of the most significant private collections of contemporary art in Germany.

In 1993 the collection was transferred to the Udo und Anette Brandhorst Stiftung and exhibited as the Brandhorst Collection at Museum Brandhorst, which opened in Munich in 2009.

In 1987 Anette Petersen-Brandhorst became a member of the Gerda Henkel Foundation’s Board of Trustees, becoming Chairwoman in 1998 after the death of her mother Lisa Maskell. 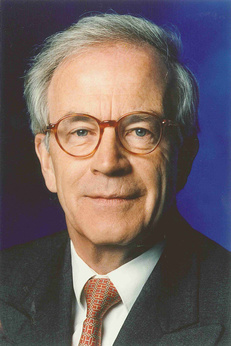 After completing his schooling and a banking apprenticeship, Hans-Dietrich Winkhaus studied Business Administration in Münster, Lausanne and Munich, graduating from Ludwig-Maximilians-Universität München (LMU Munich). He subsequently worked as a research assistant at LMU Munich’s Institute for Finance and Banking, obtaining his doctorate there in 1967. That same year Hans-Dietrich Winkhaus began his professional career at Henkel AG & Co. KGaA in Düsseldorf. Until his retirement in 2000, Mr Winkhaus held various positions in Germany and abroad in the areas of finance, marketing and sales. From 1992 to 2000 he served as Chief Executive Officer and was a member of Henkel’s Shareholders’ Committee until 2008.

Hans-Dietrich Winkhaus sat on the supervisory boards of several listed German and American companies. He also performed duties at a welfare institution and two research associations.

In 1986 Hans-Dietrich Winkhaus was appointed to the Board of Trustees of the Gerda Henkel Foundation, serving as its Deputy Chairman from 2006 until 2009, taking over from Franz Georg Maier. After retiring from his official position, he was appointed an honorary member for a further five years. 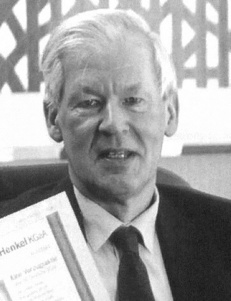 From 1989 until his retirement in 1995, Hans-Günter Grünewald (1933–1998) was a member of the Management of Henkel KGaA and from 1992 to 1995 a personally liable partner. In his management position he was responsible for the Finance/Logistics division.

After completing a banking apprenticeship, Hans-Günter Grünewald studied Business Administration, graduating with a PhD. In 1962 he joined what was then Henkel & Cie. GmbH in Düsseldorf. After working in the Foreign Department/Finances and in Corporate Planning, from 1977 to 1989 he was a member of the Henkel KGaA Board of Directors. In 1986 he was made a member of the Shareholders’ Committee of Henkel KGaA and supported the Henkel Group in an advisory capacity even after retiring in 1995. 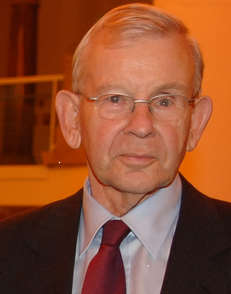 Franz Georg Maier (1926–2014) was Professor of Ancient History at the University of Zurich from 1972 until his retirement in 1994. After studying at the universities in Tübingen, Zurich and Rome he graduated with a PhD in 1951 and qualified as professor in 1957 in Tübingen. From 1963 until 1966 he was Professor of Ancient History in Frankfurt/Main and from 1966 until 1972 Professor of History at the University of Konstanz, of which he was a founding member.

From 1952 until 1955 Franz Georg Maier worked as a member of the British Kouklia Expedition in Cyprus; from 1966 he led the excavations in Old Paphos (Cyprus) on behalf of the German Archaeological Institute. From 1977 until 1978 he was President of the Commission for the Swiss School of Archaeology in Greece (ESAG) and in 1992–93 Visiting Scholar at the Institute for Advanced Study in Princeton, USA. Moreover, he was a full member of the German Archaeological Institute and Honorary Fellow of the Society of Antiquaries of London.

Franz Georg Maier was a member of the Gerda Henkel Foundation’s Academic Advisory Council since its establishment and sat on its Board of Trustees as of 1996, becoming an honorary member in 2006. 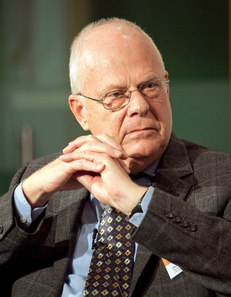 Meinhard Miegel (born 1939) has been Chairman of the Board of Denkwerk Zukunft – Foundation for Cultural Renewal in Bonn since 2007. Prior to that he headed the Institut für Wirtschaft und Gesellschaft Bonn e.V. and the Zentrum für internationale Wirtschaftsbeziehungen at Leipzig University.

He studied Philosophy, Sociology and Law in Washington D.C., Frankfurt and Freiburg, graduating in 1961 with a Bachelor of Arts, in 1967 with a PhD and in 1969 passed the second state law examinations. From 1970 to 1973 Meinhard Miegel worked as an in-house lawyer and assistant to the central management of Henkel & Cie. GmbH. Subsequently he worked for the secretary general of the CDU, Prof. Kurt H. Biedenkopf. In 1975 he joined the management and became Head of the Politics Department at the CDU headquarters in Bonn. In 1992 he was appointed Extraordinary Professor at Leipzig University.

From 1995 to 1997 he chaired the Kommission für Zukunftsfragen der Freistaaten Bayern und Sachsen, between 1999 and 2003 he was a member of the presidential commissions for “Social law” and “Social sciences” of the Max Planck Society, and from 1997 to 2005 a member of the Advisory Board of the Berlin Social Science Center. From 1997 to 2006 Meinhard Miegel was scientific consultant to Deutsches Institut für Altersvorsorge GmbH in Cologne. From 2003 to 2007 he sat on the Supervisory Board of Wall AG, Berlin, was spokesman of BürgerKonvent e.V., and a member of the Board of Trustees of the Max Planck Institute for Demographic Research, Rostock. He is a member of the European Academy of Sciences and Arts and is a Supervisory Board member of Deutsche Industrie Service AG.

Meinhard Miegel was appointed to the Board of Trustees of the Gerda Henkel Foundation in 1997 and served as its Deputy Chairman from 2010 until 2014. 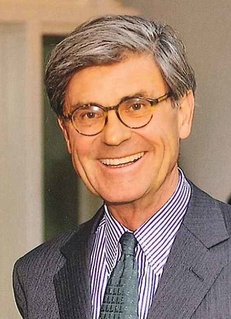 Michael Muth was Senior Partner, Gesellschafter  and Director of McKinsey & Company, Inc., New York. He was a member of the firm’s global management bodies and responsible for Insurance & Asset Management in Europe. Michael Muth was Senior Advisor to one of America’s leading investment banks. He sits on the Board of German and non-German firms specialising in the international financial sector. He is sole owner of the company BlueTrust, which focusses on investments in SMEs and start-ups.

He is a member of the Foundation Board of the Udo und Anette Brandhorst Stiftung. Michael Muth is a lawyer; he obtained his doctorate from the University of Freiburg and an MBA from INSEAD/Fontainebleau. He has published numerous articles in the international business press, especially on questions relating to corporate strategy and the capital market.

Michael Muth was appointed to the Board of Trustees of the Gerda Henkel Foundation in 1998 and remained a member until 2014.