Can there be any restitution of lost meaning?
Achille Mbembe on African objects in western museums

“Africa will have paid the world a heavy tribute, and it is far from being over.” (Achille Mbembe)

Achille Mbembe is quite simply considered one of the leading representatives of post-colonial theory. Last year the political scientist was honoured with the Gerda Henkel Prize in recognition of his research work. As part of the awards ceremony he gave a lecture “On African objects in western museums.” The exhaustive version of his lecture is now available in English and in German.

Achille Mbembe investigates the question of what the West intends with its offer to return the art objects to their countries of origin in Africa. He calls for a capacity for truth in the policies on restitution. For him, this also means that any restitution that does not simultaneously involve recognition of the damage done and the injustice perpetrated is not an option. Instead, a real and comprehensive debate is required. "The risk is that by failing to give an account of itself while restituting our objects, it concludes that, with the restitution complete, our right to remind it of the truth is removed. But for new ties to be woven, it must honour the truth.”

The speech in honour of Prof. Mbembe was given by State Minister for International Cultural Policy in the German Federal Foreign Office, Michelle Müntefering. Other articles include an interview with Achille Mbembe conducted by Berlin-based African historian Prof. Dr. Andreas Eckert and the Welcoming Address by the German Federal Minister of Education and Research, Anja Karliczek. 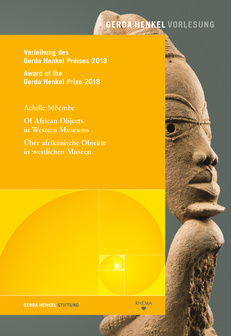 We will gladly send you a review copy.