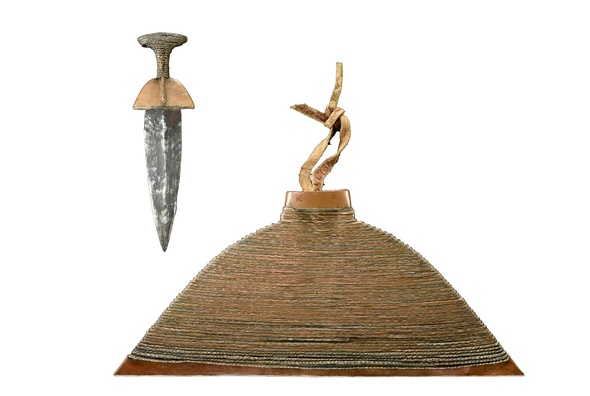 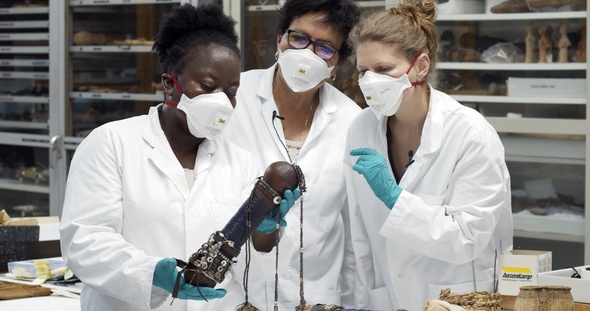 As part of a partnership between the Museums Association of Namibia (MAN) and the Prussian Cultural Heritage Foundation, several experts from Namibia have been guests at the Ethnologisches Museum, Staatliche Museen zu Berlin, since spring 2019. Together with the museum's researchers, they examined the approximately 1400 objects in the museum from Namibia with respect to their history, significance, and artistic potential. In the subsequent project "Confronting Colonial Pasts, Envisioning Creative Futures", made possible by the Gerda Henkel Foundation, 23 of these objects, including jewellery, prestige objects and historically important artefacts, will travel to Namibia. There they will be further explored over the next three years and will be available to contemporary artists for creative exploration. The Ethnologisches Museum and the Museums Association of Namibia have initiated an unprecedented, open-ended cooperation, which is largely steered by the Namibian partners.

Hermann Parzinger, President of the Prussian Cultural Heritage Foundation, emphasizes: "We want to build sustainable relationships that are characterized by mutual respect and transparency in dealing with each other. We have already practised this in a number of other larger projects, for example with partners in Tanzania, Rwanda or the Amazon region. What makes this project unique and groundbreaking, however, is the extent and intensity with which the partners can work with the objects, since we not only invite guest researchers to work in Berlin, but also, through the journey of the objects to Namibia, numerous participants can work with them on a long-term basis. The fact that the Gerda Henkel Foundation finances this cooperation so generously is unbelievably valuable and exemplary for us."

Golda Ha-Eiros, Chairperson of the Board of the Museums Association of Namibia, curator for Liberation Heritage in the Ministry of Veterans Affairs and guest researcher at the Ethnologisches Museum, sees great potential in the journey of the objects to Namibia: " Because of the history and knowledge of Namibian communities, the objects can unfold their full cultural, social and historical meanings in Namibia".

Michael Hanssler, Chairman of the Board of the Gerda Henkel Foundation, adds: "I hope that this pilot project can generate a double effect: On the one hand, we are moving towards real cooperation as equals with our Namibian partners in coping with our colonial past. And secondly, in the direction of the federal government and the federal states, to make a stronger commitment - and that means also with considerably more financial means - to the permanent return of objects from colonial contexts to the societies of origin. Loans from German museums to Namibian institutions can only be a first step. The ultimate goal must be to restore any objects that have been stolen or acquired under questionable circumstances promptly and permanently."

The Collections of the Ethnologisches Museum from Namibia

The historical collections from Namibia in the Ethnologisches Museum Berlin were mainly acquired during the German colonial period (1884-1919). The museum has been researching their provenances since the beginning of 2018 and in recent months together with the Namibian visiting scholars. The collections reflect the often extremely violent processes of colonial appropriation. In addition, they show the creativity and ingenuity of the Namibian people. They are thus an important source for historical research as well as a source of inspiration for contemporary artists and designers. Due to the German colonisation of Namibia, the vast majority of such objects are in German and not Namibian institutions and are therefore not accessible to most Namibians. With the project financed by the Gerda Henkel Foundation, a first step is being taken, beginning with the objects' journey to Namibia, to remedy this imbalance. The greatest portion of the funds, amounting to around 400,000 Euros in total, will go towards work in Namibia.

In recent weeks, the Namibian partners have selected 23 objects from the collection from Namibia in the Ethnologisches Museum for loan to the National Museum of Namibia. This was done in close consultation with community representatives in Namibia. In addition to the Museums Association of Namibia, the National Museum of Namibia and the University of Namibia are also project partners. In Germany and in Namibia, cooperative research on the collections will be continued and made available to the public and stakeholders.

In Namibia, four workshops lasting several days are planned at the National Museum of Namibia. These workshops will reactivate and document knowledge associated with the objects and other forms of immaterial cultural heritage, such as historical techniques and materials. In addition, the Gerda Henkel Foundation will finance a conservator and a documentalist at the National Museum of Namibia and will support the museum with capacity building workshops and materials for the preventive conservation of its collection. Furthermore, the foundation will provide two scholarships at the University of Namibia that will allow postgraduates to transfer research from the museum to cultural heritage communities.

The inspirations sparked by the objects from Berlin will also contribute to a Museum of Namibian Fashion planned by the Museums Association of Namibia. In this context, other essential elements of the project are the production of works of art that relate to the historical collections, the appointment of a curator to design the opening exhibition of the Museum of Namibian Fashion, and the museum itself. The aim is to build capacities for the preservation and enhancement of collections in Namibia.

Hertha Bukassa, Culture Officer at the Namibian Ministry of Education, Arts and Culture and guest researcher at the Ethnologisches Museum Berlin: "The objects show that we have preserved our cultures despite the threat of colonisation".

Nehoa Kautodonkwa, Museum Development Manager, Museums Associ-ation of Namibia, emphasizes the potential of historical objects: "I believe that objects are a form of unique archives that can help us create alternative narratives. We are excited about the stories these objects will reveal to us."

For Jonathan Fine, Curator of the Collections from West Africa and Namibia at the Ethnologisches Museum, the project is characterised by its collaborative process: "The future of ethnological museums lies in bringing people together to reactivate dormant knowledge and to create new ways of understanding each other.

Julia Binter, Provenance Researcher at the Ethnologisches Museum, adds: "This project unites two perspectives, looking back and looking forward, dealing with the colonial past and envisioning a creative future".

Larissa Förster, Academic Advisor of the project, emphasizes the exchange of knowledge and competence: "The history of Namibian objects in German museums has not been dealt with for a long time. In this cooperative project, the sovereignty of interpretation is shared, if not shifted to Namibian stakeholders." Museum Association of Namibia