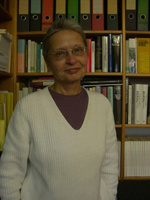 The German Historical Institute London (GHIL), the International History Department of the London School of Economics and Political Science (LSE), and the Gerda Henkel Foundation in Düsseldorf are pleased to announce that they have made their third appointment to the position of Gerda Henkel Visiting Professor in the field of Germany in Europe. For the first time, the timeframe for the research promoted in this position has been extended to cover the period from 1890 to 2000. From 1 October 2011 Ute Daniel, professor of modern history at the Technical University in Brunswick, will spend a year researching at the GHIL and teaching at the LSE. With this appointment, the Gerda Henkel Foundation is supporting Ute Daniel’s research on relations between the mass media and politics in the twentieth century, a topic which she will investigate comparatively in Germany, Britain, and the USA. Ute Daniel will deliver her inaugural lecture, entitled ‘Goebbels, War, and Propaganda: On the Media Logic of the Third Reich’, at the GHIL on 27 October 2011.

Ute Daniel, born in 1953, studied history, German language and literature, and linguistics at Marburg and Bielefeld. In 1986 she completed her Ph.D. at the University of Bielefeld with a thesis on working women in a war society, concentrating on profession, family, and politics during the First World War. She completed her Habilitation thesis in 1994, writing a history of court theatres in the eighteenth and nineteenth century. From 1984 to 1996 she worked as a research fellow and lecturer at the University of Siegen. In 1996/97 she was appointed professor at the Technical University in Brunswick. Her research interests focus on European cultural and social history from the eighteenth to the twentieth century, and the theory of cultural historiography. In 2001 she published a compendium on this topic, Kompendium Kulturgeschichte. Her most recent publications are Politische Kultur und Medienwirklichkeiten in den 1920er Jahren (2010) edited with Inge Marszolek, Wolfram Pyta, and Thomas Welskopp, and Massenmedien im Europa des. 20. Jahrhunderts (2010) edited with Axel Schildt.

The Gerda Henkel Visiting Professorship in the field of Germany in Europe was inaugurated in 2009 for the period 1945 to 2000. The aim of the position is to stimulate interest in German history in Britain and to encourage comparative research in a European context. The timeframe covered by the professorship has been extended this year to cover the period from 1890 to 2000.